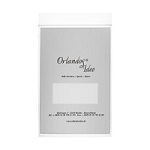 Star anise has its origin in China and Vietnam. The Star Anise three is an evergreen who grows up to 6 meters in height and carries green yellowish flowers.

Culinary use of the Star Anise

You can use Star Anise whole or ground (more intensive).