Vanilla has its origin in Mexico and was discovered and cultivated by the Aztec. In the Year 1822 brought the French the Vanilla plant to the Island Bourbon today called Reunion and started cultivation thereof.

Pollination of the Vanilla Orchid 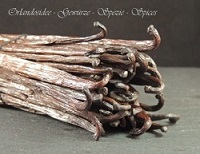 The Vanilla orchid is in flower only in the wee hours of the morning. In Mexico the Melipona Bee and a special kind of a hummingbird pollinate the Vanilla orchid. If the pollination doesn't take place in these hours the Vanilla pods do not grow. The cultivation nowadays takes place by hand and is very time consuming.

In the early hours of the morning during the flowering time the vanilla is pollinate by hand with wooden sticks just like toothpicks. 24 hours after successful pollination the vanilla builds the pods who grow for the next 4- 6 weeks to the desired 13-20 cm long beans.

Cultivars and Quality of Vanilla

Today Vanilla grows around the globe in the warm and humid climate of the subtropics. Commerce distinguishes the Quality of Vanilla by its length and its origin.

End customers, gastronomy and ice manufacture use the black gourmet Vanilla pods with a length of 16-18 cm with 1,7-2 % Vanillin.

Vanilla and their Origins

The Planifolia Vanilla from Madagascar and from the Island Reunion carry the name Bourbon Vanilla.

The Vanilla Planifolia from India is in taste and aroma comparable with the Bourbon Vanilla. The prominent cocoa aroma from the Planifolia Vanilla rises from the quality of the soil in India.

Tahitensis Vanilla from Papua New Guinea has a distinguishable anise aroma and is preferred used for the preparation of ice cream. This kind of Vanilla is a hybrid of the Vanilla pompona and Planifolia. The most aromatic pods of this Vanilla are 16-18 cm long.

The Tahitensis Vanilla from the island of Tahiti is very rare. There is only a small amount available for the world market. European Chefs preferred this type of vanilla

The Tahiti vanilla is indicated by very thick and bendable pods with a round flowery smell of anise and wild prunes.

Vanilla beans should be stored in an airtight box at a temperature around 15 °C in a dark and dry place.