Pepper is the fruit of the pepper plants (Piperacea) which a tropical tendril plant is with about 700 kinds(ways). From the 3rd year carries(wears) you twice per year your fruits and this during 30 years.

The pepper plant grows up to 10 m, however she will grow in the commercial cultivation 3-4-m height . She needs shade and a lot of water, however, it may not stand in the water, otherwise, it roots rots. Its best to grow the pepper plant on hills, so that the rainwater can run off. 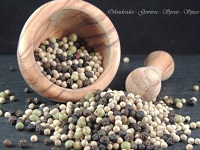 All three kinds of pepper come from the same plant

The green pepper is the immature pepper berry. It is either dried, shock-dry(shock-dehydrated) or placed in Lake. becomes. He is suited for preparing sweets as well as the green pepper sauce.

The white pepper Is picked fully ripe and soaked for several days in the fluent water until the external cover frees itself and leaves the white heart of the fruit, the white pepper

The black pepper is picked fully ripe and dried under the sun. The outer shell of the pepperberry turns black and becomes wrinkes

Pepper is not just pepper

Pepper differs very much in the taste. One recognises a good pepper by its name. The names come as a rule from the port of exit or cultivation.

One should buy pepper only in whole grains and grind it just before use. 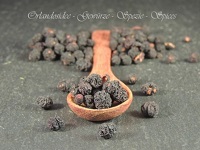 The Orlandosidee Pepper is the best Pepper of the world according to our Gourmet Cooks.


Why is the Orlandosidee Pepper special?